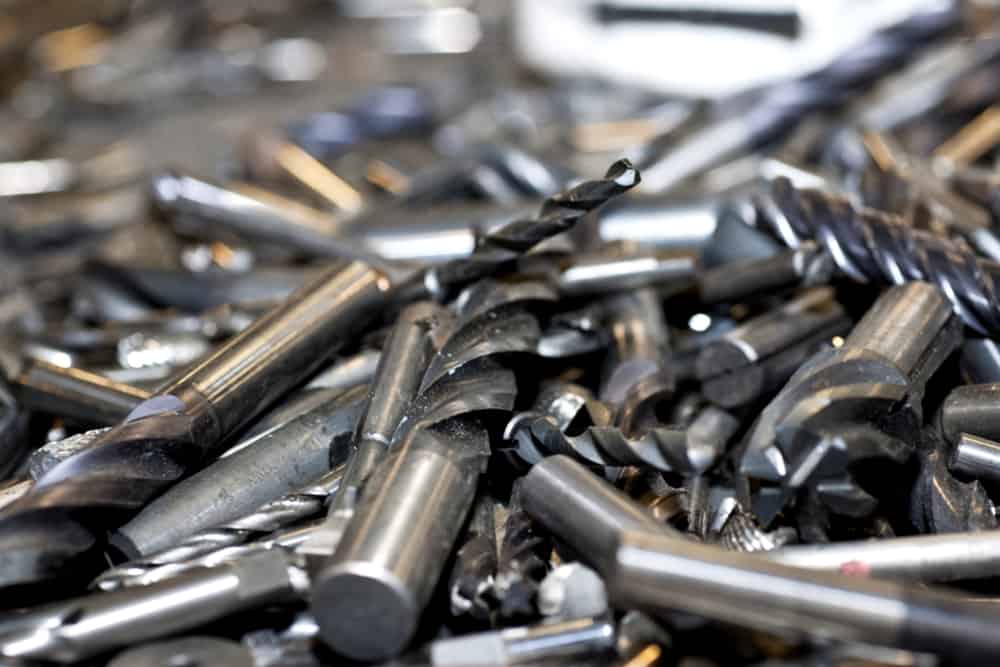 The Challenges of Tungsten Machining

Tungsten—also known as Wolfram—is one of the most functional industrial metals. With an atomic weight of 183.84, it’s alongside gold (196.97) and lead (207.2) as one of the heaviest and densest of the non-radioactive metals. However, unlike lead and gold, tungsten is an incredibly hard metal. Tungsten rates a Mohs hardness of 7.5 compared to that of ordinary steel (4-4.5). It is also capable of resisting enormous amounts of heat. In comparison with other high heat metals like molybdenum, tungsten has a much higher melting point. This density and hardness, along with tungsten’s heat resistance, are what make the metal so useful.

However, these properties also make machining tungsten incredibly difficult. It’s hard to cut and shape metal when its orders of magnitude are harder than the tools available to work it. Tungsten is more typically sintered—powder formed and heated until the powder fuses—cut with lasers, or otherwise worked using nontraditional methods. Nevertheless, tungsten machining is possible and is used to make highly specialized devices.

When machining tungsten, there are a few different types to choose from. A comparison of two of the most common forms of tungsten is detailed below, as well as a brief guide describing how to effectively machine them.

While there are several different types of tungsten, the most familiar forms to metal workers are likely to be alloys of tungsten used in tungsten welding electrodes and tungsten carbide tooling. It is the latter that is most commonly used and is likely to be familiar to anyone who has shopped for drill bits at a hardware store. While tungsten is involved in making this tooling, tungsten carbide should not be conflated with metallic tungsten or metallic tungsten alloys. They are very different.

Overcoming the Challenges of Tungsten Machining 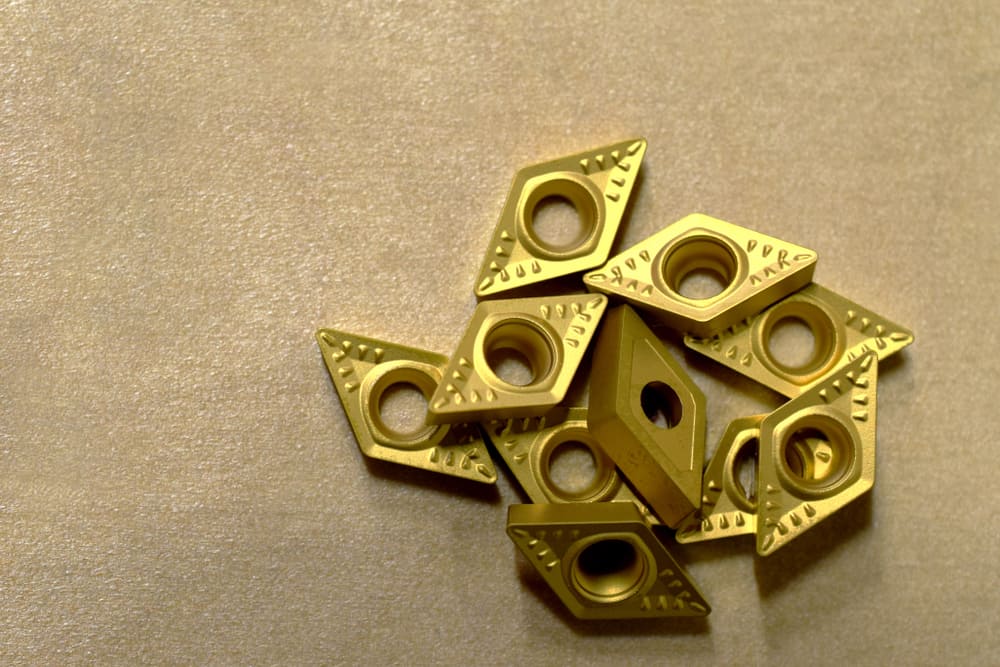 Tungsten’s hardness comes with the disadvantage of being very brittle at room temperature. This can cause unwanted chipping. A range of methods has been proposed to mitigate tungsten’s brittleness. One method is to heat the material to its ductile-to-brittle transition temperature point of approximately 500° to 700° K (~400 to 800° F). Conversely, there is experimental evidence that cooling tungsten to cryogenic temperatures enhances its machinability. Reaching either of these temperature extremes is likely outside the reach of most machine shops that don’t specialize in machining heavy metals and don’t have specialized equipment. The guide to tungsten machining below assumes a room temperature environment working with commonly available tooling.

The brittle nature of tungsten is a trait shared with cast iron, another frequently machined metal. Cast iron machining provides a loose guide, and tungsten machining will use turning speeds and feed rates similar to that of cast iron. It assumes the use of commonly available C-2 tungsten carbide-tipped tools or full carbide mill ends and inserts. Diamond tooling can also be used. However, diamond tooling tends to be more expensive, and less widely available.

Processes that use a lathe for machining tungsten should use the following setup guidelines for an acceptable result. A positive rake where the face of the cutting tool slopes away from the cutting edge of the inner side is recommended for turning or boring operations. This will reduce the cutting forces, vibration, and chipping, resulting in a smoother surface. Recommended settings can be seen in the table below.

Coolant can be used in the above operations. However, air is assumed to be the primary method of cooling tools. 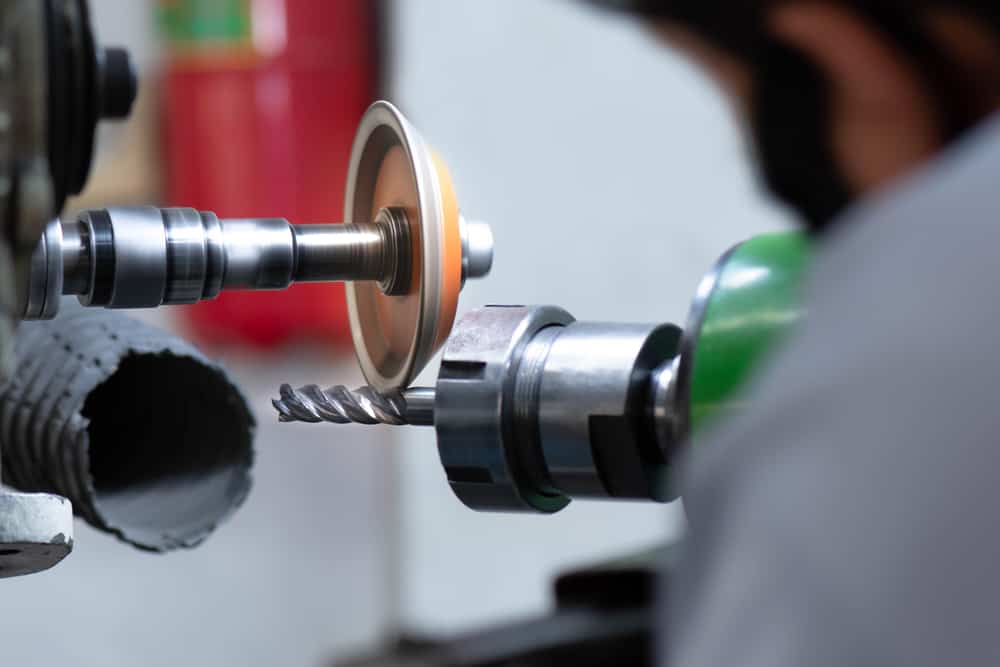 Operations against a flat surface of tungsten that aim to smooth or shave away the surface should use the following settings:

Tungsten carbide tools should be used for drilling holes into tungsten and tungsten alloys as well as for tapping the holes to thread them for bolts. The drilling operation can be air-cooled, or a moly disulfide cutting coolant can be used. The holes should be drilled to 50-55% of the tap hole requirements. Due to the hardness of tungsten, solid carbide taps are recommended for any job that requires more than one or two holes. Thread forming taps should only be used on small diameter holes if needed.

The general rule of thumb in tungsten machining—and with hard brittle metal—is to err on the side of caution. Taking things slowly and methodically is better than permanently damaging a workpiece made of a rare and exotic metal alloy that is potentially very expensive. It is worth considering the uses that justify the expense of tungsten and the labor needed to work it.

What Is Machined Tungsten Used For?

Surprisingly, while tungsten is the hardest metal known, this isn’t why it’s often used in industry. Instead, tungsten is utilized mostly for its heat resistance and density. It can be found lining industrial blast furnaces as well as providing high density, low-volume ballast and counterweights for aircraft. One of the few instances where tungsten’s hardness, as well as its density, plays a role in its use is in penetrating ordinance. The heavy darts at the core of anti-tank ammunition are often made of tungsten. However, none of these applications are where highly-machined tungsten is most commonly used.

That distinction belongs to the directed radiation industry. Tungsten’s high density makes it an effective shield against high-energy particles. It’s sought after for radiation shielding and focusing. Tungsten collimators with focusing holes drilled through them are often used in medical imaging to guide and focus beams of high-energy radiation such as x-rays. Tungsten also has similar uses in other types of medical imaging, scientific instruments, and physics. Given its rarity, however, finding tungsten to machine for these purposes can be as challenging as tungsten machining itself.

Find Tungsten for a Fair Price at a Local Metal Supplier 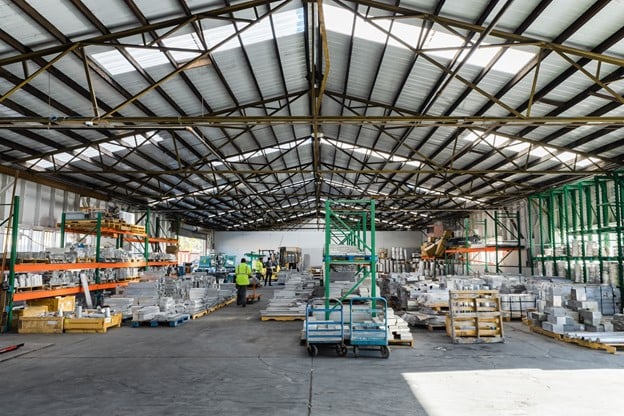 In any industrial process that uses metal, there is often leftover remnant metal in usable lengths. Tungsten is no exception, with many industrial jobs completed using recycled tungsten plate and round stock. The best waste metal recycling process is direct reuse, and remnant tungsten and tungsten alloys like Hevimet and Densalloy can still be machined into functional devices. They need only be purchased from a reliable industrial recycler.

Industrial Metal Service has been providing the San Jose area industry with fair and honest metal recycling services for more than two decades. Tungsten and tungsten alloys are just a few of the many exotic metals that IMS commonly recycles, and serviceable lengths and volumes of tungsten and tungsten alloys are often available on-site. We also recycle used tungsten carbide end mills and inserts, with no minimums on how much can be recycled at a time. Great value can be found when recycling these spent tools.

Contact us today to find out what’s available for tungsten machining. We look forward to meeting your metal requirements!
Contact Us